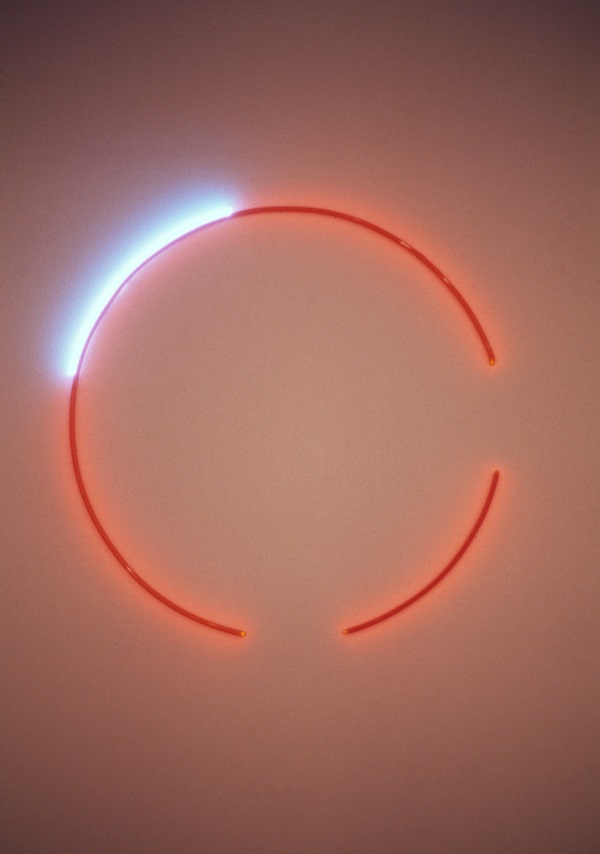 Antonakos’ work with neon since 1960 has lent the medium new perceptual and formal meanings. His use of spare, complete and incomplete geometric forms has ranged from direct 3-dimensional interior installations to painted canvases, Walls, the well-known back-lit Panels with painted or gold-leafed surfaces, and the Rooms and Chapels. Throughout, he has conceived work in relation to its site — its scale, proportions, and character — and to the space that it shares with the viewer. He calls his art, “real things in real spaces,” intending it to be seen without reference to anything outside the immediate visual and kinetic experience. Since the late 1970s he has made large scale Public Works with the same concerns plus the inevitably broader engagement of space and auxiliary light outdoors. Colored pencil drawings on paper and vellum, often in series, have been an equally rich practice since the beginning. He has also made Packages, Artist’s Books, and Reliefs of white wood and of silver. There have been over 100 one-person shows including a recent 50-year retrospective seen in Greece and the United States, more than 250 group shows, and over 50 Public Works installed in the United States, Europe, and Japan.