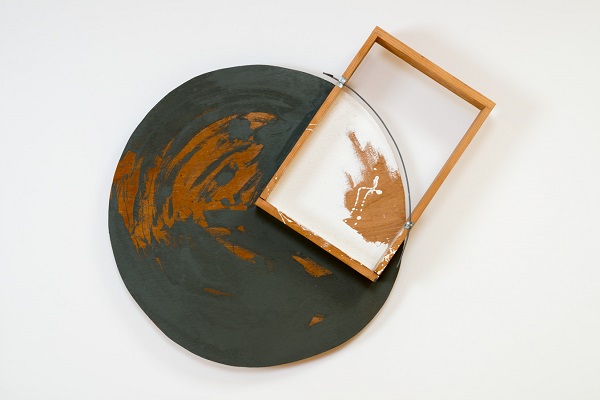 As an early leader in the Mono-ha (School of Things) group active in Japan in the late 1960s and early 1970s, Kishio Suga helped redefine the trajectory of Japanese art. Like many of his colleagues, Suga’s work consisted of careful arrangements of natural and industrial materials, juxtaposed to highlight an active and tenuous relationship. In this work from 1993, Suga’s interest in space and material interaction continues, as a dark circle is overlapped by an open frame. The overlap of the frame creates a tension between the negative space of the white wall and the positive space of the white paint, and the attached metal rod suggest an active spatial relationship between the boundaries of all the shapes. Suga’s work has been the subject of numerous solo exhibitions in Japan and has been part of landmark international surveys.