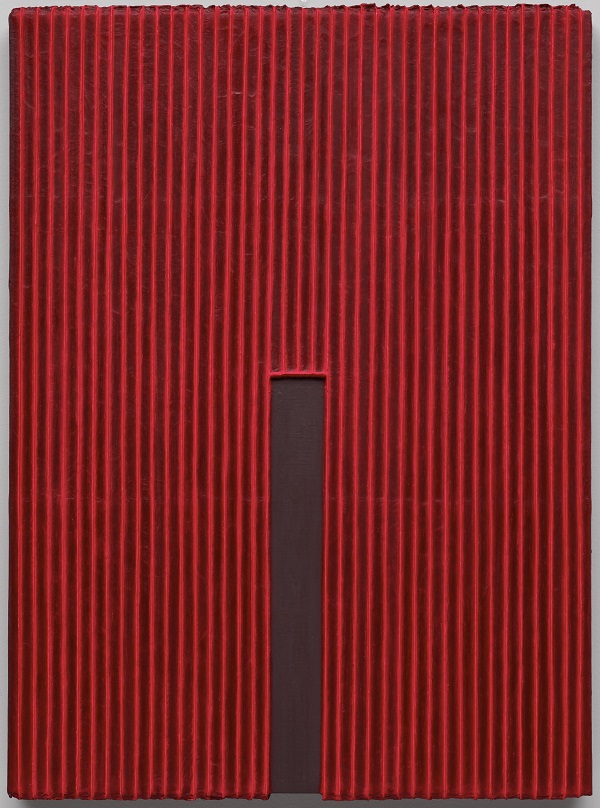 What I learned about paper…was that it was connected with everything of domestic life. For instance the covering of a floor in the house was done with mulberry paper and then covered with oil. There were other similar functions of that kind which made me feel so emotionally and intimately connected with it materially on one hand, and spiritually on the other. — Park Seo-Bo

An early member of the Dansaekhwa group of Korean artists who challenged traditional modes of painting with their monochromatic works, Park Seo-Bo continues to make groundbreaking work that resonates with the power of process and material. His Ecriture series began in the mid-1960s with pencil-inscribed, oil on canvas works. In the early 1980s, Park developed the technique seen here in Ecriture No. 141122. Several layers of wet mulberry paper, called hanji, are stacked on top of one another. The layers are saturated with water-based paint and ink, and before they dry, Park uses an implement to incise parallel lines across the surface. Rectangular areas – called “breathing spaces” – are cut away to reveal color below. Park’s evocative use of pattern and emptiness resonate with ideas from Eastern philosophy and understandings of nature. As Park has said, “I think of my paintings like monks praying in a Zen garden.” Park’s work is included in museum collections around the world, and he has been included in numerous solo and group museum exhibitions.