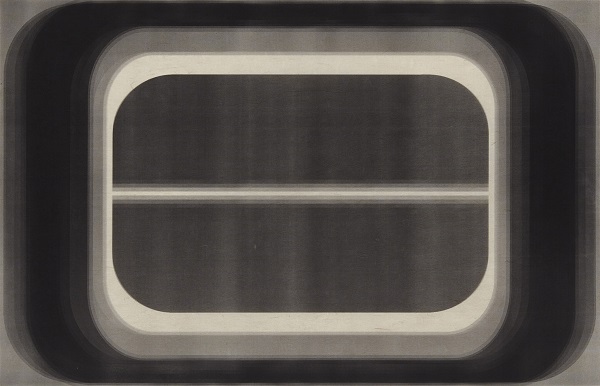 To make her laser toner works, Marsha Cottrell creates and alters images on the computer, and then feeds paper through an electrostatic printer, often multiple times, allowing the ink to build up and change with each subsequent pass. Though made popular in recent years by Wade Guyton, Cottrell began experimenting with repeated digital printing in 1997 while working in production at a magazine. In Aperture Series (23), layers of powdery iron oxide toner build up in a dense, matte ovoid composition. A chattered horizon line appears in the opening, and though the work is dependent on contemporary technology, it conjures the look and feel of something from the past – perhaps a Bauhaus composition or satellite image from the 1960s. Cottrell’s work has been included in exhibitions at galleries and institutions in the US and Europe.