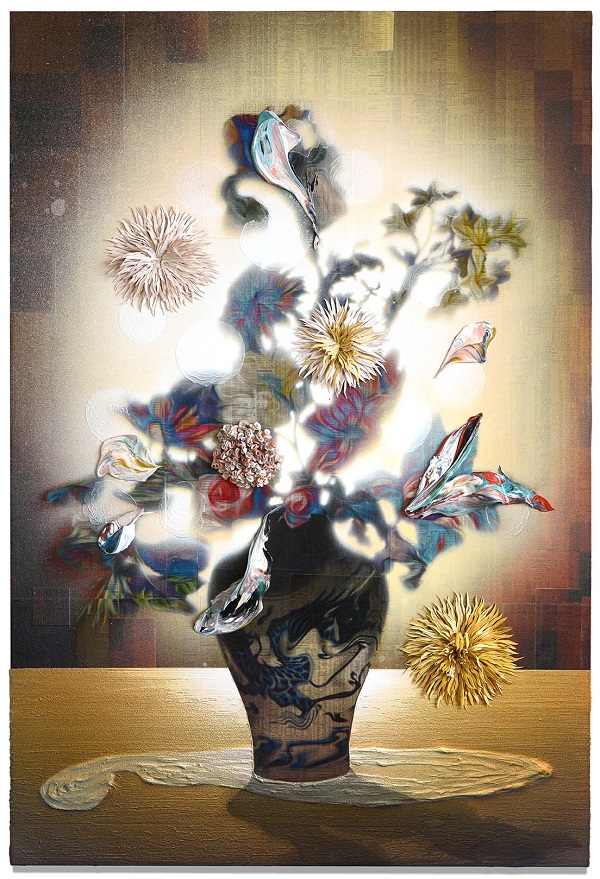 By appropriating the lavish style of Dutch Golden Age still life paintings, London-based artist Gordon Cheung is able to layer in critiques on globalization and empire building, while maintaining a simple, visually appealing image. In his Still Life series, Cheung examines globalization by incorporating historical allusions to empires, trade, and the rising influence of China. 100 Suns (Study) references Mao Zedong’s statement to “let a hundred flowers bloom,” that gave rise to dissonant art movements before the communist party reversed course and censored its political opponents. The densely packed imagery alludes to numerous struggles inherent in globalization: the tulip trade bubble of the Dutch empire, the export of Chinese Ming vases, and the collaged stock listings that pervade the background and seep through the flowers and vase. Even the decorative shape the vase rests on is Xisha Island, a contested South Sea island reclaimed by China. The final image blends the complexities of globalism and the rise of China as a super power with the seductive simplicity of an art historical genre.