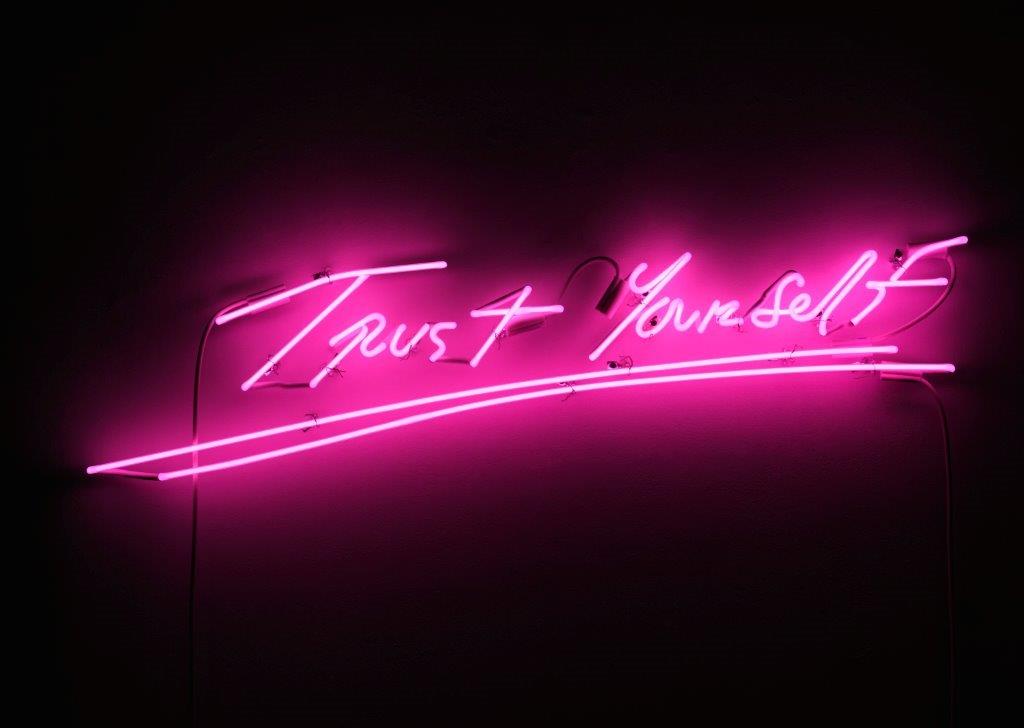 Tracey Emin’s deeply autobiographical work is sure to elicit a response. Though many are content to dismiss her as a bawdy media personality – an art star with attitude – those who get to know her work are struck by its candor, rawness of emotion, and sensitivity to craft and material. Emin initially gained attention in the art world as part of the YBA (Young British Artist) group in the early 1990s, and her well-known tent-sculpture Everyone I Have Ever Slept With 1963-1995 (which was destroyed in the 2004 Momart fire) was part of the Sensation exhibition. Her artistic output has included sewn fabric pieces, films, drawings, and neon text, seen here in Trust Yourself. Her neon works are always created in her handwriting, like notes written to herself or scrawled in the margins of a sketchbook. Translated into a glowing industrial sign, the message here takes on another level of importance, perhaps as a mantra or psychological reminder. In 2007, Emin represented Britain at the Venice Biennale. Her work is included in many of the world’s most prestigious public collections, including Brooklyn Museum of Art, New York; British Museum, London; Camden Arts Center, London; Centre Georges Pompidou, Paris; Garage Center for Contemporary Culture, Moscow; Hara Museum, Tokyo; Museum of Contemporary Art, Los Angeles; Museum of Modern Art, New York; National Portrait Gallery, London; Neue Nationalgalerie, Berlin; San Francisco Museum of Modern Art; Tate Gallery, London; and Walker Art Center, Minneapolis.