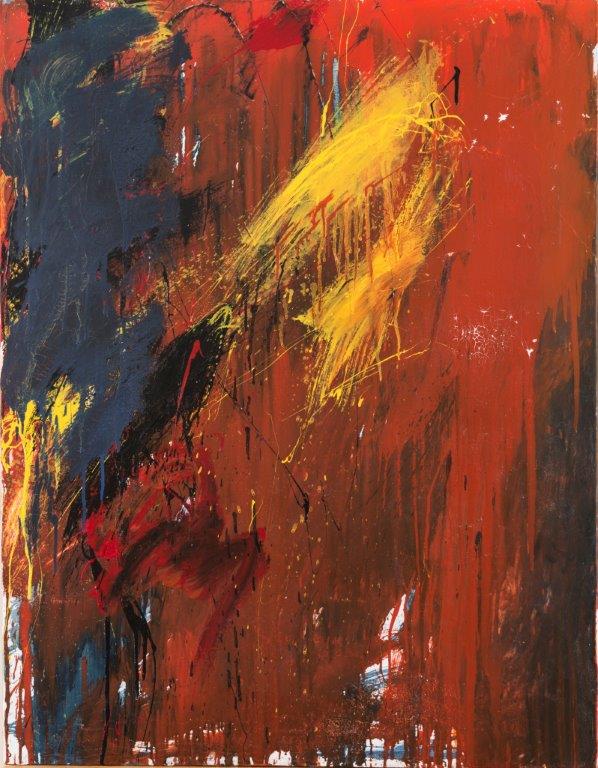 As a central member of the Gutai group in the 1950-60s, Saburo Murakami became known for his experimental paintings and performances (in particular, his iconic Paper-Breaking works where he burst through kraft paper screens). In the late 50s, he began making paintings by mixing and applying the paint in such a way that it would begin peeling or cracking, ultimately “auto destructing” after the artist’s hand left the work. Like other Gutai artists, Murakami believed that a worn, deteriorated quality in the work offered a more authentic presence of the material. In the Gutai Manifesto (1956), group leader Jiro Yoshihara writes about this quality:

Yet what is interesting in this respect is the novel beauty to be found in works of art and architecture of the past which have changed their appearance due to the damage of time or destruction by disasters in the course of the centuries. This is described as the beauty of decay, but is it not perhaps that beauty which material assumes when it is freed from artificial make-up and reveals its original characteristics? The fact that the ruins receive us warmly and kindly after all, and that they attract us with their cracks and flaking surfaces, could this not really be a sign of the material taking revenge, having recaptured its original life?

In this work from 1959, some of this auto-destructive quality is clearly visible in the blue passages on the left and in the brown area near the bottom, though the work also shows some of the more painterly, gestural processes that occupied Murakami’s practice in the late 1950s and early 1960s. Murakami’s work has been included in numerous international exhibitions, most recently in the Gutai: Splendid Playground at the Guggenheim.