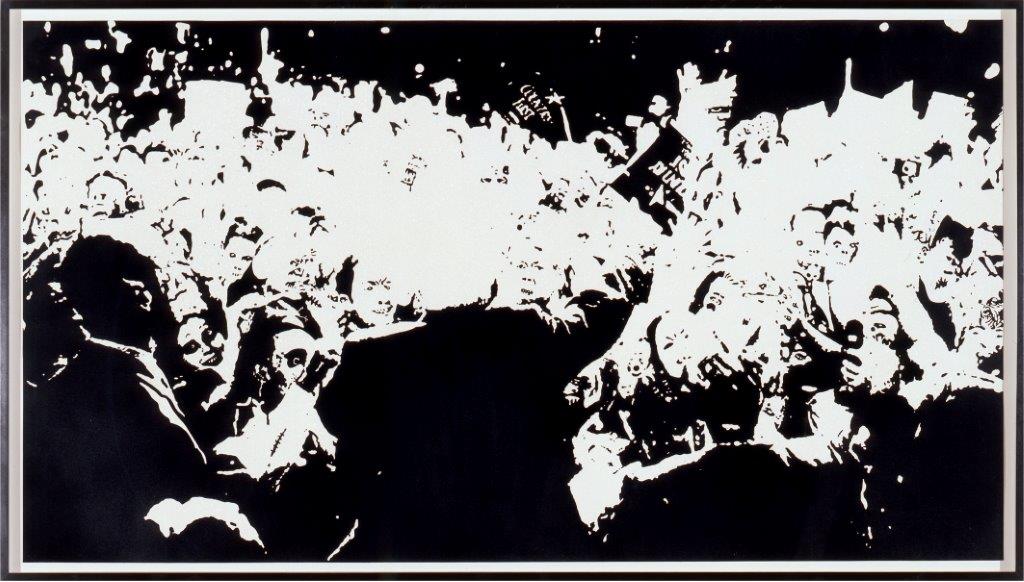 Tom Friedman pushes the materials, objects, and images of our everyday lives into new, often absurd, territory, and in the process forces us to slow down and reconsider them. In Rally, the image is immediately recognizable as a photograph from behind a campaigning politician as he addresses his supporters. Much of the scene’s details are transformed through the high contrast image, though signs bearing the words “Country First” (John McCain’s 2008 presidential campaign slogan and the name of his subsequent PAC) can be made out as the eye adjusts to the piece. Glitter and flocking – common, craft materials – are often used as a quick way to add a kind of cheap beauty and texture to a project, and Friedman’s use of them conjures a number of associations (from children’s art projects to black light posters) that complicate the political image, while also knocking McCain’s message down a few pegs. Solo exhibitions of Tom Friedman’s work have been held at the Museum of Modern Art, New York, the Art Institute of Chicago, and at the Prada foundation in Milan. His first mid-career retrospective ran from 2000 to 2002 and toured the following venues: the Museum of Contemporary Art, Chicago; Yerba Buena Centre for the Arts, San Francisco; Southeastern Centre for Contemporary Art, Winston-Salem; Aspen Art Museum; and the New Museum of Contemporary Art, New York. Friedman’s work is in numerous public collections, including Museum of Modern Art, New York; San Francisco Museum of Modern Art; Guggenheim Museum, New York; Metropolitan Museum of Art, New York; and Museum of Contemporary Art, Los Angeles.