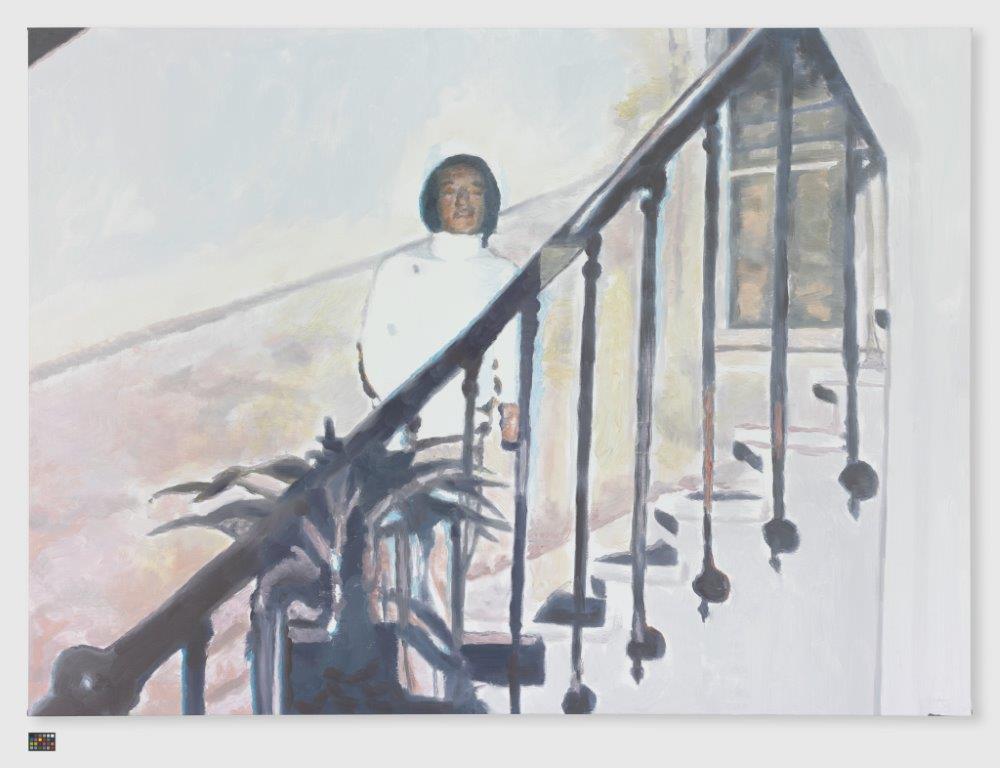 Like all creative people, artists recoil at being categorized. Born in Mortsel, Belgium, in 1958, Luc Tuymans lives and works in Antwerp. The wide expanse of Tuymans’s artistic achievements makes him commensurately difficult to describe pithily.

His paintings are deceptively inviting to those hungering for representational art. But the invitation comes with major caveats. There is much roiling beneath his typically dry, thin, sparing palette. Tuymans mines images of everything from public figures to complex geopolitical events. His pictures are layered with an awareness of the painterly tradition preceding and informing him, and the relentless onslaught of mass culture.

Tuymans generously donated a recent work titled Mr. Sagawa (2013) to TWO X TWO for Art and AIDS. Its sale will benefit the Dallas Museum of Art and the American Foundation for AIDS Research. At a quick glance, Mr. Sagawa portrays a man on a staircase, partially hidden by a potted plant. The seemingly innocuous subject of Tuymans’ painting is anything but. Issei Sagawa, born in 1949, was a Japanese man who murdered and cannibalized a Dutch woman named Renée Hartevelt.

Five-foot tall Sagawa blamed his sexual perversions on a strict upbringing. He moved from Japan to Paris at the age of 28 to pursue a doctorate at the Sorbonne. Four years later, he invited a classmate to his apartment, shot her in the neck, sodomized her corpse, and tried to eat her. Upon realizing that a butcher knife was needed, he procured one and returned to the scene of the crime. This grisly plan played out for two days, after which he sought to hide the mutilated remains in a lake, but was spotted by onlookers, and arrested by authorities who found parts of the deceased in his refrigerator.

Extradited to Japan, Sagawa was eventually allowed to check himself out of a mental hospital when Japanese authorities were prevented from obtaining French court documents. He has been free since the summer of 1986, and has written about his crime with seeming impunity.

Like the gruesome crime committed over thirty years ago, this haunting portrayal of the respectfully titled “Mr.” Sagawa leaves more questions asked than answered. The white-clad cannibal grins down at us from the staircase, safe from our reproach, out of the reach of the law, and unaffected by the devastation he brought to another human being and her family and friends. We are left to wonder if this canvas is based on a snapshot taken in the very Paris apartment building where the crime was committed.

By consecrating an image of this criminal in a cherished and precious medium, Tuymans compels us to reflect on how easily we stray into voyeurism, and how the border between titillation and disgust is fading given the ubiquity, instantaneity, and evanescence of violent imagery in our planet’s media-saturated atmosphere.

Tuymans is a master at mining the poignant intersection of man-made beauty and horror. As a museum director I am often confronted with the challenge of presenting dark or painful artworks in a context today awash with commerce, entertainment, and the expectation of effortless pleasure. Artists like Tuymans obligate us to look into our soul, and deny us an easy relationship with art as we witness the misconduct of the human race on television, in tabloids, on the web, and here, in paint. In the process he reminds us that voyeurism is not blameless–while not being culpable of the crime, we are, through our passivity, complicit in the cover-up.