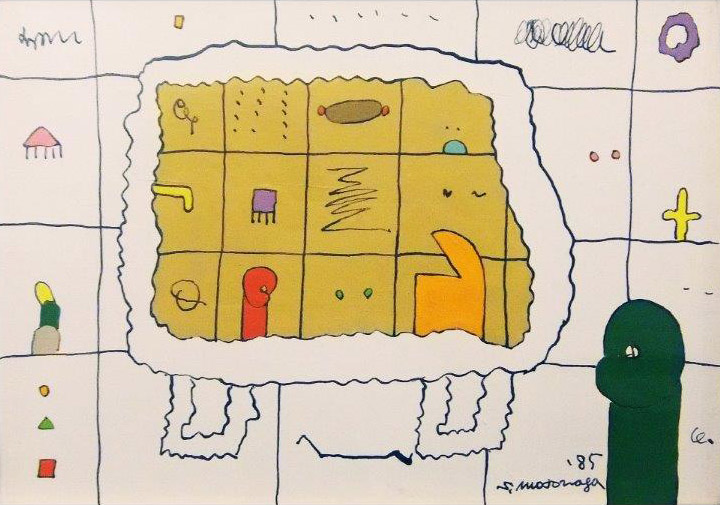 Sadamasa Motonaga joined the Gutai Art Association in 1955, but it was a year earlier that he began employing his iconic visual language of embryonic shapes and cartoon-like forms in heavy oil paint. Over time, an interest in children’s art influenced his evolution from abstract oil paintings into more animated and illustrative works. In 1966-67, a grant allowed him to live and work in New York, where he embraced acrylic paint and discovered an airbrush technique that enhanced his hard edge paintings of bright cartoon-like forms. The 1985 acrylic work Green Mighishita is a wonderful example of Motonaga’s clean and cartoon-like compositions, the green figure in the lower right exists within this wonderful matrix of shapes, squiggles, and colors. Sadamasa Motonaga is influential not only as a Gutai artist, but also occupies a unique position in the Japanese art discourse, foreshadowing the works of popular Japanese contemporary artists such as Takashi Murakami, Yoshimoto Nara, and beyond. Motonaga’s work has been the subject of many retrospective exhibitions in Japan, most notably at Hyogo Prefectural Museum of Art, Kobe, 1998; Hiroshima City Museum of Contemporary Art, 2003; Nagano Prefectural Museum of Art, 2005; and Mie Prefectural Museum of Art, 2009. Retrospectives of the Gutai Art Association have been held at the National Gallery of Modern Art, Rome, 1990; Guggenheim Museum SoHo, New York, 1994; Jeu de Paume, Paris, 1998, and most recently this year in the Guggenheim show Gutai: Splendid Playground.