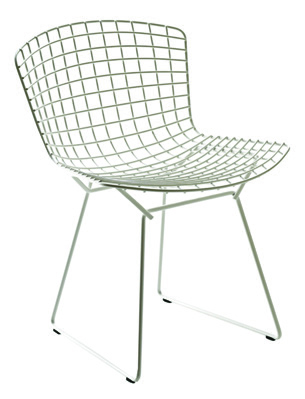 With his iconic seating collection, Harry Bertoia transformed industrial wire rods into a new furniture form. The events that made this work possible began a decade earlier at Cranbrook Academy of Art when Bertoia met Florence Knoll Bassett (then Florence Schust). Years later, the Italian-born designer was invitedto work for Florence and her husband Hans Knoll. Bertoia was given the freedom to work on whatever suited him, without being held to a strict design agenda, and the result of this arrangement was the Bertoia Seating Collection (1952). Featuring a delicate filigreed appearance that’s supremely strong, these airy seats are sculpted out of steel rods. In his art, Bertoia experimented with open forms and metal work, and these chairs were an extension of that work. “If you look at the chairs, they are mainly made of air, like sculpture,” said Bertoia. ”Space passes through them.” After designing his seating collection, Bertoia returned to focusing mostly on sculpture. His work was often used in projects by Eero Saarinen (another Cranbrook friend), notably at MIT and the Dulles International Airport. Manu- factured by Knoll according to the original and exacting specifications of the designer. Made in Italy.