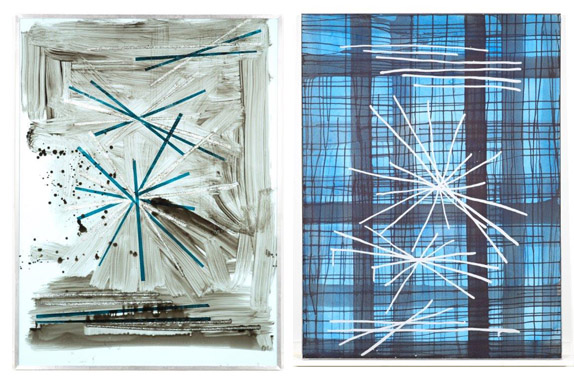 The multidisciplinary artist Dashiell Manley uses ideas of language as a starting point for the creation of content-layered objects and videos that explore originality and reproduction. In his two-sided paintings, Manley creates a poetic translation of systems between the front and the back by a slight mirroring of compositions. Here, we see the visual elements of asterisk-like lines echoed on both sides, ultimately bringing into question the ideas of origin, while simultaneously reinforcing the artist’s role as author. Los Angeles based Manley received his MFA from UCLA in 2011 and was included in the Hammer Museum’s 2012 Made in LA. His work has been exhibited across the United States and is now in the permanent collection of the Hammer Museum in Los Angeles.